Sarah Lee Dennis experienced a sudden betrayal trauma, which caused Post-traumatic stress disorder for several years. “Forgive, let go and move on” all the self-help books said. The reality was not as easy as it sounded. In fact, no matter how hard she worked on forgiveness it remained an impossible goal. She was simply stuck, why couldn’t she just “forgive”? What was wrong?

Sarah Lee Dennis talks about her 2 year quest to forgive, and Premature Forgiveness 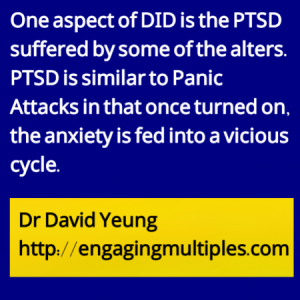 One aspect of DID is the PTSD suffered by some of the alters. PTSD is similar to Panic Attacks in that once turned on, the anxiety is fed into a vicious cycle – psychiatrist David Yeung

Dissociative Identity Disorder (formerly known as Multiple Personality Disorder) is caused by overwhelming early life trauma, so knowing how to manage dealing with the flashbacks present in Post-traumatic stress disorder is important.

Read his article Grounding exercises and working with flashbacks. 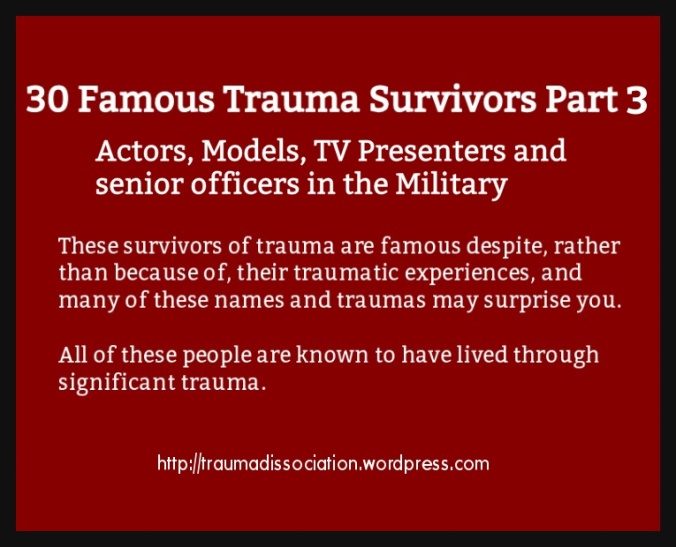 Reminder: Only some of these people have disclosed a PTSD diagnosis, but all lived through significant trauma. Some were traumatized before the official recognition of Post-traumatic Stress Disorder in 1980.

22 Amanda Holden
Actress and TV presenter.
British actress Holden was diagnosed with PTSD after nearly dying during a cesarean section during her daughter’s birth in 2012.

23 Carré Otis
Model and actress.
Carré Otis grew up with an alcoholic father, was raped at 17, experienced domestic violence, and was raped again as an adult. Her modeling career involved frequent sexual harassment, and she modeled for Guess? and Calvin Klein. She used eating disorders and drug addiction to cope with her difficult past. She is now an ambassador for the National Association of Eating Disorders.

24 Joan Collins
Actress
Collins recently spoke being drugged and date raped at 17 (by her future husband, who was a famous star at the time). She felt obliged to marry him and guilty because he took her virginity; the marriage was abusive. She gave an interview about this in the film Brave Miss World, in which a former Miss World talked about her own rape.

25 Mo’Nique
Comedian and Actress.
Child sexual abuse. Mo’Nique drew on her experience to play the part of the abusive mother in the film Precious.

26 Oprah Winfrey
TV show host and author.
During a 1986 show on sexual abuse, Oprah revealed she had been raped by a relative as a 9 year-old, and was abused by several people for a number of years. She used sexual promiscuity to cope, having a baby at 14 who died. She continues to advocate for sexual abuse survivors.

27 Teri Hatcher
Actress.
A Bond girl and star of Desparate Housewives, Teri spoke in 2006 about being sexually abused as a 5 year-old.

28 Waris Dirie
Somalia-born supermodel, author and campaigner against FGM.
Waris experienced Female Genital Mutilation (FGM) as a 5 year old, which caused her years of pain. At 13 she was forced into marriage with a 60 year old, so she fled home and later found her way to London. She needed surgery prior to childbirth because of the damage.

29 Audie Murphy
Soldier.
Military combat.
Famous for being the most decorated American Soldier of World War II, he was wounded many times and awarded the Medal of Honor and many Purple Hearts after being injured in combat. Physical injury increases the risk of PTSD. Murphy was also decorated by French and Belgian governments. After the war he sleep with an automatic pistol under his pillow and struggled with nightmares. He died in 1971.

30 Major General John Cantwell
Austrialian Army General
His autobiography Exit Wounds described how he hid his PTSD for 20 years and continued in the army, being promoted to Deputy Chief of the Australian Army. He experienced survivor guilt and avoided cars due to fear of car bombs. He became suicidal and was later admitted to a psychiatric ward for a week, retiring soon after. 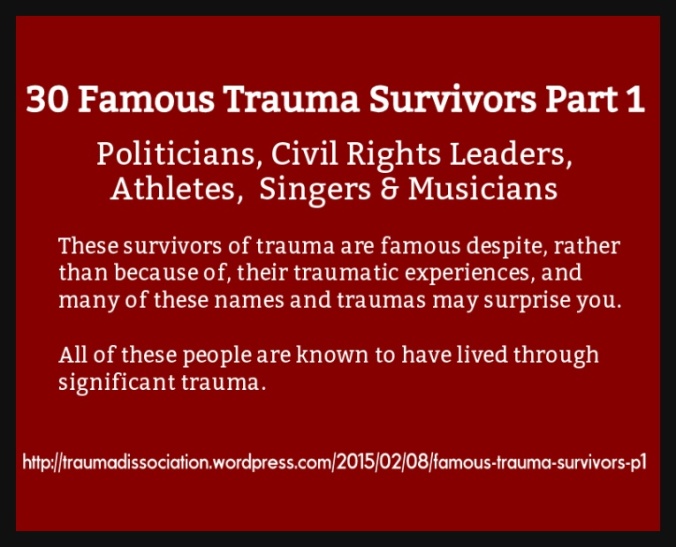 Some have disclosed that they have Post-traumatic Stress Disorder, and some have not. Some experienced trauma prior to 1980, the year that PTSD first became a diagnosis, before this it was recognized using trends such as ‘shell shock’, ‘combat fatigue’ or ‘traumatic neuorsis’, ‘battered woman syndrome’ and ‘rape trauma syndrome’ but often symptoms were ignored.

4 Abraham Lincoln
Former US President.
Almost drowned at age seven, his mother died 2 years later, his older sister another 10 years later, and his first love died before they could marry. Three of his four children died in childhood, and he is described as experiencing long-term clinical depression and PTSD before his murder in 1956.

5 Joe Simpson
Climber and author.
Simpson was a world-class climber when a climbing accident almost killed him. Seriously injured, with no emergency rescue available, and his climbing partner believing he was dead, Simpson somehow crawled down the mountain and survived. His book Touching the Void was the first of five climbing books he has written.

6 Monica Seles
Tennis player.
Seles was stabbed in the back by a rival’s fan during a match in 1993, at the height of her career. Her autobiography describes how her PTSD left her afraid to go back on the court with her back to the crowd, and how her injury affected her ability to play. Her attacker was not jailed so she also remained in fear of further attacks. She regained her health and athletic form, and overcame her PTSD avoidance enough to play professionally again.

10 Marilyn Manson
Musician.
Child sexual abuse, his album and single “Smells Like Children” reflects this theme.
Lyrics may be triggering.

Only some of these people have disclosed a PTSD diagnosis, but all lived through significant trauma. Some were traumatized before the official recognition of Post-traumatic Stress Disorder in 1980.

11 Mick Jagger
Singer/Musician.
Diagnosed with PTSD after his girlfriend, model L’Wren Scott, committed suicide in their home. Sudden and traumatic death of a loved one is a known cause of PTSD.

12 Spike Milligan
British comedian.
Traumatized in World War II, he fought in numerous campaigns in Italy and was wounded in the war. He was demoted after an officer refused to acknowledge he was suffering PTSD. After the war he developed bipolar disorder and had many breakdowns.

13 Tina Turner
Singer.
Tina Turner experienced Domestic Violence including rape at the hands of her husband, Ike, and child abuse. She become more famous after leaving Ike and becoming a solo artist. Her past is described in her autobiography and the film What’s Love Got To Do With It.
Interview with Ike and Tina Turner about the domestic violence she described

14 Tori Amos
Singer/Musician, Co-founded the Rape Abuse Incest National Network (RAINN).
Tori Amos is well known as a survivor of sexual abuse (rape), a theme which is present in many of her songs. Her music and history inspired the name of sexual assault forum Pandora’s Aquarium, named after one of her songs. 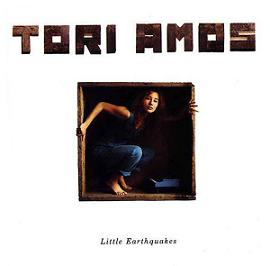 15 Alice Sebold.
Author.
Sebold is a rape survivor, and best known as author of the best-selling book Lovely Bones. She was raised in a dysfunctional family, and her memoir Lucky describes her brutal rape, which she was told she was lucky to survive.

16 David H. Hackworth
Author and journalist at Newsweek.
Hackworth was awarded eight purple hearts, he lied about his age to enlist in the Army at fifteen years old, and served in the Korean and Vietnam wars. His books on military themes include The Price of Honor (1999) and Hazardous Duty (1997).

17 Jackie Onasis
U.S. First Lady, 1961-1963.
Jackie Kennedy, later known as Jackie Onasis, witnessed the fatal shooting of her husband, U.S. President John F. Kennedy, by a sniper while she was sat next to him in an open-top car. She reacted by trying to grab his shattered head and prevent anything further coming out. She could easily have been murdered or shot by the same person. Later she remarried, and became an editor after her second husband died.

18 Stephen King
Author.
Stephen King is best known for his horror novels, including Carrie, The Shining, The Green Mile, and Misery. King was 4 years old when he witnessed another child being killed by a train, which he does not remember. He was seriously injured and nearly died in 1999 after being hit by a van while out walking. He almost lost his right leg.

19 Rudyard Kipling
Author and poet.
Child physical abuse including torture by his caregivers. Kipling is author of The Jungle Book, and Kim.

20 Victor Frankl
Psychiatrist, neurologist, and author.
Frankl, born in Austria, was director of the Neurological Department of Rothschild Hospital immediately before the Holocaust. He spent 3 years in concentration camps, and his wife died in the Bergen-Belsen camp. His best known book “Man’s Search for Meaning” sold over nine million copies on the U.S. He was awarded 29 honor degrees and lectured on 5 continents. 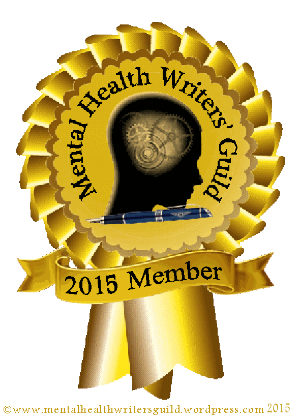 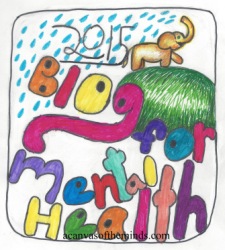